From now on, passenger ships would be used primarily for cruising.  Cruising was still a niche business and the prevailing thinking was that small ships that could dock in shallow Caribbean ports were best suited for cruising.  It looked like the day of the big ship was over.

Yet, that is not the way it worked out.  Cruise ships have gotten bigger and bigger and now far surpass the size of the great ocean liners of the past. In this article, we look at the evolution of large ships by looking at the ships that were the largest of the large over the last five decades. * ​ 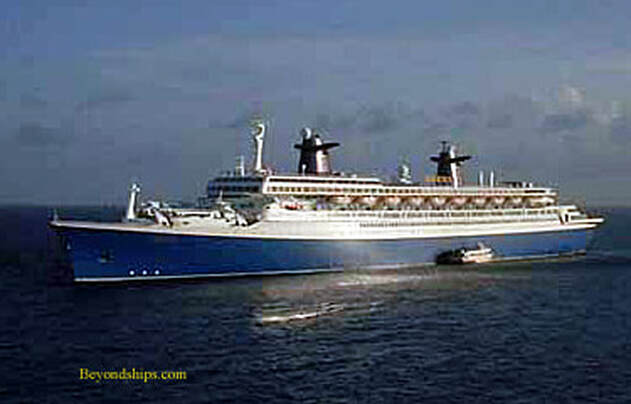 In this article, we use gross tonnage as the criterion for determining which was the largest ship at the time.  Gross tonnage is the traditional way of measuring the size of a passenger vessel.  Note that it is a measure of revenue producing volume, not weight or displacement. (See article).  Also, we are only looking at ships in service.  Thus, if there was a ship with a higher gross tonnage at the time but it was not in service, it would not be considered.
Cruise ship information - Pictorial History of the Largest Passenger Ships - page 1